That’s absolutely no exaggeration. When CIFIKA first stepped onto the stage it was as if some sort of heavenly being had descended from the cosmos with every intent of blessing an audience of mostly fangirls.

I’d heard her songs here and there, been blown away with how left of center she was, and as with a lot of things that prove my utter failure as a music fan, forgot to follow up. However, upon doing a bit more research on her a few weeks prior to SXSW, I’d rediscovered just how phenomenal an artist she is. How powerful her mind is, just how expansive her imagination.

Under a single white light, she sets up her soundboard and stands poised like royalty in front of her microphone. She addresses the audience, her voice just a whisper above the coo of a dove, “Hello. My name is CIFIKA.” While many sort of let out the obligatory whoops and hollers for a new act coming to the stage, I was waiting for the moment when she let her music pour out of her. I couldn’t contain my excitement.

The Korea Spotlight (formerly, K-pop Night Out) crowd has a very distinct demographic. Introduce something unfamiliar and one of two things happens: they’re absolutely awe-stricken or they cower in fear. To say CIFIKA surprised the audience would be such an understatement as to be disrespectful.

She begins her set softly, a raindrop on the cheek. You almost don’t notice it until the downpour. She’s a master of her craft, weaving her angelic soprano around industrial crunches and aggressive snarls. Despite the mostly new-age electronica, there’s so much softness to her sound, a raw prettiness that is almost holy.

She soars into her upper register as she reaches the highest heights of her vocal range. She then caresses the earth with a fingertip as she pulls some stunning alto notes from the depths of her soul. She doesn’t opt for ostentation in her performance, instead standing still save for a few movements as she manipulates the soundboard in front her. Even her costuming, which can at times err on the more wild and unpredictable side, is relatively tame: an orange wind suit, a simple white shirt underneath, sneakers on her feet. But… that voice. 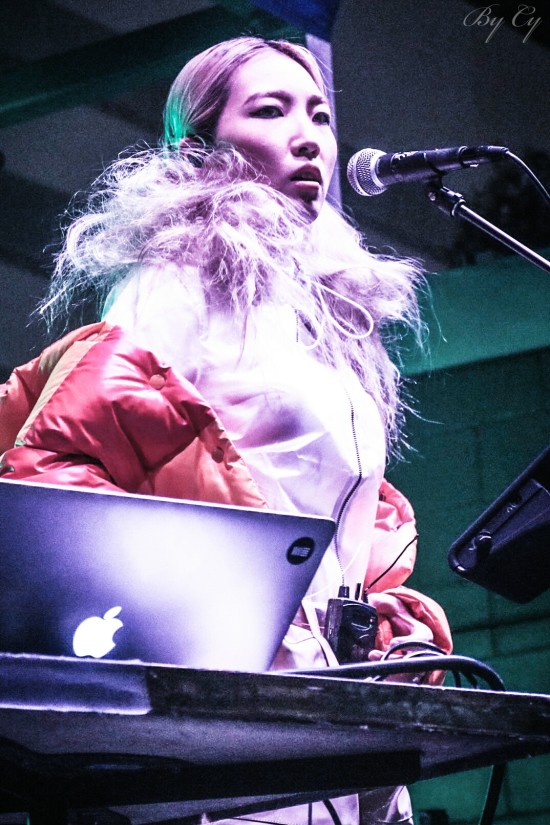 Though it’s trite to go for comparisons, it’s hard to deny just how much CIFIKA reminds me of another pixie angel. She is very much like Björk in one profound way: She takes what is simple, what nature has given her, and raises it to its fullest potential. It is raw, unpretty, natural. But when expanded to its furthest scope, it is completely transformed into something beautifully alive.