Surely you didn’t think we’d get through Zandari without me having a two-part interview, did you? Come now. You all should know me better than that! There was bound to be one artist so generous with their time I’d have to split up our conversation. Well, here it is. My chat with blues-rock band Decadent — a name you should be very familiar with by now given my adoration of the band.

Decadent is a band I’ve had a heavy ardor for since I listened to the first few notes of their ONSTAGE performance of “A.”

Our introductions actually began before we even sat down together. Dennis Jin, owner of all that vocal power, had to come retrieve me from the venue to get to the cafe where we’d be having our chat. When we get there he offers to buy me a drink, an iced green tea. After taking a sip of the strong brew, I gird myself for a conversation I’d been wanting to have for over two years now.

This is the first time we’re doing an interview with a recorder,” Dennis reveals. It’s no surprise. This is a band that, whether on stage or not, should be recorded live. But all I have is a recorder, a notebook, and a pen. With that, the members of the band officially introduce themselves.

“Hello, my name is Dennis and I’m a singer in Decadent.”

“I’m the bassist,” the long-haired gentleman at the far end of the table says.

“Seol,” he says with a small smile.

“I’m the drummer,” comes the energetic response from the bespeckled young man sat between Chang and Seol. “I’m Christian.”

With their own names revealed, it’s only natural that I’d want to know what brought them all to decide on “Decadent” as the moniker of their collective.

“So you want the short story or the long story?” Chang asks with a bit of a smirk. I love the implication that there’s something deeper than my own theories behind the name

“So we were choosing names like Dragon Balls, like skills,” Dennis says, throwing me for a moment. Definitely not what I expected. “There were lots of names that came from that. And I was telling my fellows, ‘What about Decadent? What about Decadent?’

“We choose it because I love the way… like, ‘Artist called Decadent.’” He says it with the air of an announcer proclaiming the arrival of an austere group of gentlemen come to grace an unsuspecting audience with their presence. “Oscar Wilde,” he continues. “I like those kinds of artists. So I wanted to do music like that. I thought it was beautiful because they did the thing they wanted to do. And that made them beautiful. Not in terms of ‘decadent’ like we know. More like different ways of thinking. Yeah, so that’s why we called it Decadent. 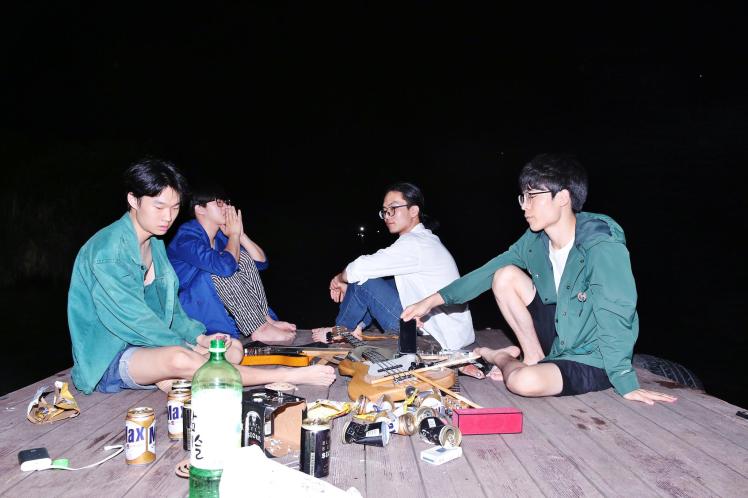 If you’ll recall from their mail-in pre-Zandari interview from last year, they gave us that answer when asked to describe their band. This year, they’re not getting off that easily, especially since I’m sitting right in front of them. When I tell them they’re going to have to actually explain what it means, Dennis gives a rueful chuckle and a sigh. Details, my boys. It’s all about the details.

“Extremely subjective beauty,” he starts, then pauses for a few moments to really think about the meaning behind the phrase. “It’s a bit weird to say ‘extremely subjective beauty.’” He explains that the actual wording in Korean — 지극히 주관적인 아름다운 — is a bit smoother, has less of an odd texture when said in their native tongue. “But I think it’s the same thing,” he says. “We do the thing that we want to do. And that’s part of ‘subjective.’ ‘Extremely’ means only the four of us wanted to do the way we wanted to in music we liked…”

It’s obvious their more abstract definition of who they are forces them to actually consider what the wording means. That’s, of course the point, isn’t it? To get them to consider things from a different angle?

“Maybe I might explain better when it comes to this,” Chang interjects. “I suppose that the word ‘subjective,’ it can only exist when you’ve actually made the concept of subjective and objective and whatever. And in that sense, we may seem like we do not have a specific genre or it may seem like trying to deliver some certain messages. But that doesn’t mean that we don’t have certain ideas or certain genres or certain style. I would rather say it’s more like sort of…

“For example, in my very own perspective I think, through my band I want to show what it is about the connection of all music that can be gathered in all forms of rock music or all forms of black music. I find them from the same root. It’s all super connected, but the thing is nowadays people don’t really recognize it. They don’t really try to see it, they don’t really appreciate it. So to me, it makes sense in that way. It’s subjective. So it means that it may not be so approachable to others. I think that’s it.”

The table’s quiet for a few moments. Then Dennis says in a stage whisper, “You’ve never told us about that before.” Of course, this invites a resounding bout of laughter from all of us. Clearly this is something none of them expects from their lead guitarist and songwriter. After we all calm down, Dennis explains, “I was the only one speaking in this way.”

“I don’t generally speak,” Chang elaborates. “Even this, it only explains from the perspective of a composer, like in musical stuff, lyrics or ideas or whatever. I cannot explain all because I’m not the one who created all of them, so I don’t think I’m the one to say what’s what. But since you required some explanation, I’m just trying to show that perspective.”

Perspective. It’s a word that defines our time together. Everything is a matter of angles, ideas, and experiences. It’s these same ideas and experiences that is the driving force of their music. But more on that later. Now that we’ve taken a deeper look at “extremely” and “subjective,” it’s time to unpack the ever-elusive concept of “beauty.”

This time Christian answers first. “Nothing,” he says strongly. When Dennis questions him, he modifies his response: “Something!” he says with the same enthusiasm.

“That beauty itself can be everything and nothing at all is what he’s saying,” Dennis elaborates.

“I think that’s what they’re both saying. It’s conceptual. They didn’t reveal what about their own perspective,” Chang says.

“Yeah,” Seol agrees. “Everything or nothing.”

It’s a tricky thing, I suppose, navigating what “true beauty” actually is. However, these young men reveal that true beauty actually does lay in the unknown. An ambiguous thing, something intangible that shifts definition, texture, shape depending on who puts words to it can easily bring out the poet in someone. Lucky for all of us, then, that I’m in the company of a quartet of poets.

Their influences also range in texture and tone. There’s the obvious blues inspiration. However, there are hints from a variety of genres. Jazz at their most cerebral. R&B at their deepest and darkest. At their boldest, heavy doses of Parliament and Sly & the Family Stone drenched funk. Of course, the amount of soul in their music comes compliments of the heartache in Dennis’s voice, the warble and weep of Chang’s guitar, the heady heartbeat of Christian’s drums, and the sultry punch of Seol’s bass.

“I think you pretty much mentioned all my inspirations,” Chang says. “Parliament Funkadelic, Sly & the Family Stone, D’Angelo, Cream and all those great names. I think blues musicians shaped the idea that I look up to. It hasn’t been too long for me to be a fan of that music,” he confesses. “I think it’s been about three years. And it started by D’Angelo. He gave different perspectives but still sounds black. Yeah, it may sound rock. It may sound jazz, it may sound blues or funk. He gave me that example, that idea.

“It’s basically all from the same root. So I think… I don’t know, from my perspective, I’ve tried to do the same thing that he did, have all the aspects of music and get it together where it still makes sense. That’s what I’ve been doing and the inspiration of what I have about the band.”

“My inspiration comes from non-musical stuff,” Dennis says. “I do now like D’Angelo and the stuff we commonly play: rock, Red Hot Chilli Peppers. But I was the one who was not kind of into the stuff we do right now. I was a bit into things like Sigur Rós, Radiohead, I liked that stuff and early Korean pop. That was my most loved music. In Decadent when we create something new I was inspired by the films I liked the most and early modern literature of Korea and also Oscar Wilde and all other artists. The biggest inspiration in Decadent comes from non-musical stuff.

His mention of Oscar Wilde immediately perks me up. I have a heavy fondness for the outspoken and unapologetic Irish poet and playwright. His wit and fearlessness made for some truly elegant literature.

“When I write lyrical stuff,” Dennis continues, “I don’t really have a definite kind of view from writing poetry or lyrics. I first write a poem and it becomes lyrics after. That happens commonly.”

Christian’s answer is indicative of the kind of connection the musicians have with each other. “My inspiration is them,” he says with an open affection I can feel all across the table. “I love RHCP because he loves [them].” He indicates Seol with a nod.

I’m stricken with just how tight-knit they are. As a unit, as a collective, they constantly learn from each other, share and shape ideas and perspectives between one another. It’s a powerful trait to have in a band.

“Movies,” Seol says. Obviously I want to know his favorite.

“It’s called Legend,” Dennis supplies. “It’s kind of a gangster film with Tom Hardy.” I remember seeing a trailer for the film. It’s fitting, given the people I’m talking to. The story of a pair of twins who were set to rule the 1960s London underground as both brain and brawn. That idea of duality, of varying means to get what you want how you want it seems to be a common theme among all of the members.

The men of Decadent have given me a sort of expanded introduction into who they are both individually and as a band. In the next part of our interview, we delve deeper into their musicality. Stay tuned!

One thought on “A Zandari Festa Interview with Decadent (Pt. 1)”