It’s a pleasure and blessing when you encounter an artist who wears honesty like a badge of honor. Not so much insisting on their veritas, but not knowing any other way to be. Thus was my conversation with electro-pop artist Aseul. During my time at Zandari, I encountered artists who seemed to have something they wanted to get off their chest without the sometimes nebulous title of “artist” attached. Those who simply wanted to tell their truth as stripped bare as possible. Aseul was one of them.

She says something interesting to me while we’re chatting. When I brought up something she said in an interview earlier in her career, she says, “Thank you for reading that interview.” As if I wouldn’t. As if this was the first time anyone had taken care to find out who she really was outside of her former stage persona. But this honesty, bred from being in a somewhat ruthless industry, made its presence known from the moment she sits down with me at our small table in the artists’ area.

Though I’m hesitant to bring it up, I might as well get the obvious out of the way. “Everyone remembers you as Yukari.” It’s a stage name she’s long since left behind. I get the impression she’s still attempting to keep it in the past.

“I know,” she says with a slight roll of eyes. I take it as it’s meant: an expression of very real annoyance that she might have been put in a box well before her career really got started. However, I do want to get to the bottom of what exactly in her musical journey changed to make her want to evolve not only as an artist, but also in name.

“There’s no big difference between Yukari and Aseul,” she says. “I started Yukari as a nickname for music. After I released my music, I had positive feedback, and I decided to be more serious. So I changed my name to Aseul. But I don’t think there’s a lot of difference between Yukari and Aseul.” This could be the reason so many people refuse to leave the old moniker behind. But she wouldn’t be here if she remained in the past, so we press on to the present.

I’m always intrigued when people talk about their inspirations. Perhaps unsurprisingly, Aseul found much of her inspiration in artists Bjӧrk and the Cocteau Twins.

“I really love Cocteau Twins,” she says with a sort of intellectual respect. She’s not excessively demonstrative. Rather she presents herself as someone who has deep respect for whomever she’s talking to and/or about. It’s obvious when something sparks her passion. Her enthusiasm is very noticeable, but she’s got a somewhat subdued demeanor that fascinates me. Thus her explanation of the Cocteau Twins as early examples of the music she would make. “I really love shoegazing and dream pop, but I didn’t listen to a lot of electronic music. And I like a lot of vintage and lo-fi. 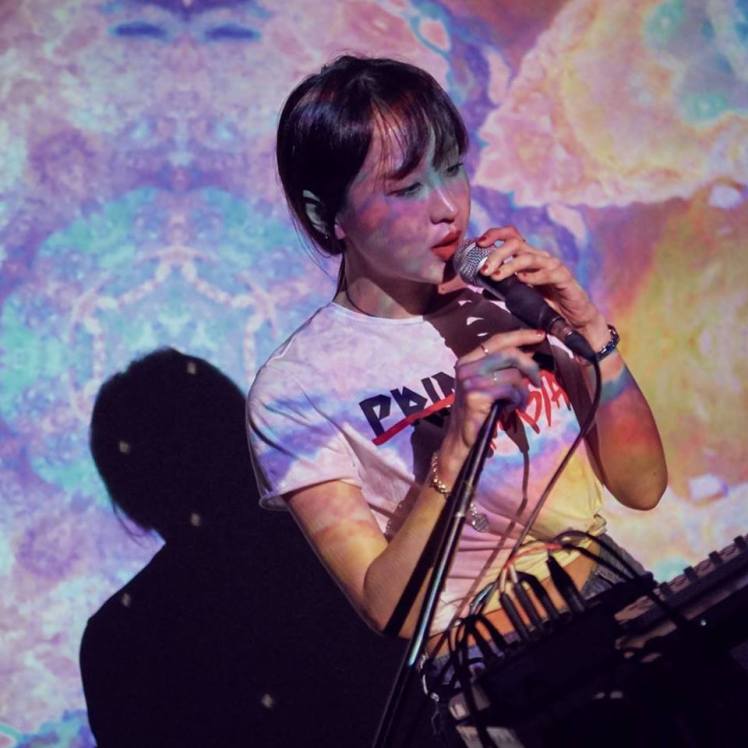 “I like poetry a lot and the artist Frida Khalo,” she continues when explaining what drives her own sound. Being a huge fan of both Khalo and Salvador Dalí, my own enthusiasm ratchets up a notch. She too gets excited. Art obviously plays a huge part in what makes her music what it is. It’s obvious for anyone who’s heard any of her work. There’s a dreamlike quality to it, something one could paint landscapes to or even reach the stars in their imagination, if we’re speaking in more purple tones. I’m curious to know if she hears music in her own dreams.

“Usually I sleep 12 hours a day. I sleep a lot.” We share a heavy bit of laughter. Her laugh is a pretty thing, much like she is. It’s light and tinkling, having its own bits of music in it. She offers it freely as she speaks, this lovely sound easing the bite of some of her humor. “I don’t usually get inspired by my dreams,” she continues. “It’s because I’m not busy,” she says with another lovely giggle.

The playfulness in her nature brings me back to the interview that drew her first bits of gratitude. In it she mentions that when she was learning piano, it was just like playing for her, as if music was another one of her toys. Her sense of humor and light personality make me wonder if she still thinks of music as her plaything.

“These days, I do music because I enjoy it. So it is like play somewhat, but now it has both aspects of work and play. But I enjoy it.”

Aseul is incredibly gracious with her answers. When she realizes that I have a keen interest in her and the way she manifests her craft, she opens and tells her truths without fear.

One thing that can be misleading for those just getting into Korean culture via K-pop or dramas is that Korean women live in extremes: extremely timid or excessively subversive. The truth is all women (or at least those I’ve interacted with) are absolutely fearless. How that bravado shows itself, however, varies from person to person. Many of them use humor to guide their personality. But it’s always drenched in a thick coat of honesty that none of them are afraid to offer. Aseul is no exception.

In this vein, I want to know what song of hers is the most personal. “They’re all personal,” she says. “I cannot imagine scenarios, so they’re mostly from personal experience.” This is actually not a common answer for many artists. Quite a few whom I’ve spoken to almost insist that their work is based on everyday life, story lines dreamed up from observing others. Very few have made it plain that their work comes strictly from themselves.

“I think that’s probably the reason why I don’t make a lot of money,” she says with more of that pretty, robust laughter.

Considering her last album, “New Pop,” seemed to garner her a great deal of attention, it’s an interesting observation. The title is apropos, in my humble opinion. It’s a new understanding of pop, what pop could be if people broadened their scope.

Though I agree in her assessment that it is sort of in direct conflict with what’s usually promoted as pop music, my curiosity is piqued. What does she actually consider to be “pop”?

“Something that a lot of people like and that sells.”

See what I mean? Fearlessly honest. It’s no surprise, then, that she doesn’t consider herself “pop.” It’s also interesting that an album so “anti-pop” garnered her a nomination at the Korean Music Awards in 2017. After expressing my congratulations, and she her gratitude, I ask how she felt about the nod.

“Honestly?” she begins, as if asking me for permission to be candid. “Honestly, a lot of electro-pop music that’s released in Korea, they don’t go through the official release process. So they cannot be nominated. So there’s a lot of electro-pop music that doesn’t go through that process, so they’re not nominated because of that. I honestly feel like I got nominated because I went through the process.”

Many might not see how bold a statement that is, but very few artists even deign to shake the tables at Korea’s music industry no matter in what aspect, let alone express any sort of distrust in the system. Despite “New Pop” being a really solid album, and in the company of such contenders as Neon Bunny, Love X Stereo, and Room306, there’s still some doubt in her mind of whether she would’ve made the cut if not for a few technicalities in the submission process.

Regardless of status or accolades, Aseul continues to push herself and redefine her thoughts on “pop.” Her latest album, “Asobi,” is a testament to her ever-increasing desire to evolve. It also hearkens back to music as her plaything.

“(Asobi) means ‘play’ in Japanese,” she explains. “I visit Japan often. When I visited Japan, there was a group of musicians jamming. I asked them, ‘Are you practicing?’ And they said, ‘Oh no, we’re just playing. — Asobi.’ I thought it’s a similar spelling to my name, so that stuck with me. I’m a solo musician, so I felt that when I’m working by myself it’s me playing.”

Listening to “Asobi,” one can see her playful nature. She makes use of more bass-laden synth and drum machines, most apparent the traditional 808.

“I listen to a lot of techno,” she begins. “Compared to ‘New Pop,’ this album I became more… I brightened up. ‘New Pop’ was also my personal experience, and I became happier. So people may feel like it’s more poppy because I’m in a happier place.”

That’s, of course, always wonderful to hear. Art, no matter the medium, is a very isolated form of expression. As such, it’s easy to get lost in the melancholy that comes with working within one’s own mind and soul. So it’s good that she’s found at least a bit of peace and happiness. It’s apparent from the smile on her face, the energy she emits. Aseul infused that sort of energy into “Asobi.” Of course, as a huge fan of house music, her use of more traditional elements excites me.

“I love the 808!” she admits enthusiastically. With Ableton Live and an artillery of hardware at her side (she admits to not using many virtual instruments), Aseul makes it very clear that creating music from the ground up is a big part of who she is. More playing. More experimenting with her toys to get the sound she desires.

Everything is progression, a step forward. So what draws her back to Zandari year after year? This will be her fourth time at the renowned festival.

“Last year (2017) I met a Chinese agency, and we signed a contract!” This draws more of her quiet enthusiasm. “I can meet a lot of international people and make connections, so that’s very fun for me to expand my résumé.

“I have only performed in Korea about two times since the release of ‘Asobi,’ she admits. “So I want to perform more to prepare for my next single.”

The Stage (the bar used as the artists’ area) is about to close. It’s good timing as our conversation is nearing its conclusion. She smiles with the warmth she’s shown during our entire chat and shares her final thoughts.

“Thank you!” she says, once again expressing genuine gratitude. “I want you to meet a lot of good indie musicians in Korea. And I thank you for taking interest in Korean indie music and not just K-pop.” It’s fitting we’d part on more of her signature veritas.

There’s so much on the horizon for Aseul. She’s got the talent and the precocious nature to take her music to greater heights, to reach for more sonically. It’s an exciting prospect, meeting someone as they continue to transition. I can’t wait to see what she has to offer fans in the future