There’s nothing quite like coming across a band for the first time. The freshness of discovering a piece of artistry for yourself is really something that can’t be paralleled. That euphoric feeling of you’ve stumbling into something special is augmented when your first experience with said artist is seeing them live. That’s happened to me more times than I should care to admit. After all, you go to a show to see an artist you already love, right? Well, while I tend to be late on a lot of things, I can’t say I regret being introduced to a band or artist’s music from the stage.

Such was the case when I saw the Street Guns on Friday, October 5. To say hearing them for the first time was a surprise would be an understatement of epic proportions. I mean, the first thing I see as they’re setting up for their set is an upright bass. It almost goes without saying that that’s not exactly an instrument one expects to see coming from a Korean rock band, am I right? Instantly, and I mean as soon as Roy sets the thing up, I’m transfixed. What can I say? I’m a sucker for a good upright bass. I soon find out that his contribution to the band is but a fragment of what makes this outfit so damn amazing.

They’re loud. That’s for damn sure. They play with a fire and furor that you’d think was only reserved for those who dabble in harder-edge rock. However, here we are, in the midst of probably South Korea’s biggest proponents of good old-fashioned rockabilly, a genre that you really just don’t associate with anything coming out of the country.

As soon as the music starts the entire audience is an uproar. You can barely hear the band for the amount of excitement roaring through that crowd. It’s electric, the amount of energy emitted from and toward the stage. My initial instinct is to focus solely on Roy, but right away it’s obvious lead singer Cheol-su has command of the stage. He’s all charisma, cheeky raunchiness, and a heavy dose of sarcasm. Yet behind all that, the flirtatious smile, the hip thrusts, there’s a man with genuine soul in his voice. He rocks and rages with the best of them and doesn’t miss a beat no matter where the band goes.

Just as soon as Cheol-su gets going really good, your eyes are drawn almost instantly to his left, to guitarist Kyu Kyu. He’s stoic, doesn’t really announce himself as vividly as the other members of the band, but when that boy gets going on the guitar it’s absolutely breathtaking. He’s got such an intoxicating command of his instrument that even in the midst of Cheol-su leading the charge on stage — jumping, fist-pumping — Kyu just goes along steadily. However, don’t let the seriousness of his demeanor fool you. Let the music start to really get to him. He’s just got to step away from the mic and let his fingers go for a run. It’s a marvel to see. 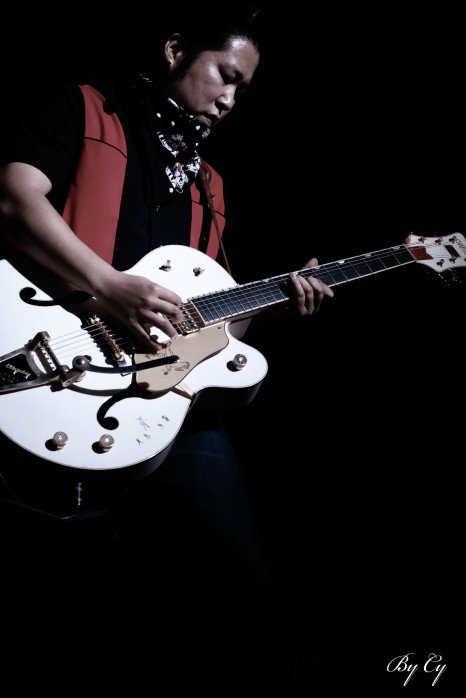 Then… Roy and his bass. Not to put too fine a point on it, but it’s honestly one of the most erotic sights I got the chance to witness at all of Zandari (and of these there were a few). He strokes that thing like a lover, hands giving form and shape to the bass’s body like he’s seducing a woman right out of her tight black dress. Never mind the fact that he handles it like a true professional, this is far beyond just playing an instrument with the competency of an obviously gifted musician. This is a man so utterly in love with his instrument you could swear he was looking at it like the one that got away.

Drummer Jeff is not one to be outdone. He may be in the back, but that doesn’t mean he’s hidden. In fact, the band situates itself in such a way that you never lose sight of him during the performance. And how could you? The man beats that drum like a steady heartbeat. So commanding is his backbeat, it sits in your chest and thumps like your own heart, the rhythm of it slipping into your blood stream and causing you to move. You simply can’t help yourself.

Then we get to probably the most intense musician on the stage, and the one with the least demonstrative presence. Tiger is an absolute madman on the ax. He’s earned that stage name. He stalks the audience silently, giving them all a false sense of security in his steadfastness. Like Kyu Kyu, he doesn’t insist upon his presence. But dammit if you don’t know that he’s there. Let that man let lose a scream in the mic or let a chord rip through his instrument and you’d think he was intentionally scandalizing you.

Which leads to what’s so impressive about the band. They’re absolutely a cohesive unit. They move and sway in concert with one another, feeding of each other. No one member is more important than the other. Though arguments could be made that Cheol-su is the real attention grabber, watching the musicians go at it with their particular tools of the trade will leave true fans of rock music in awe at their precision and their ability to outright rock.

The band goes on like this for the entirety of their 40-minute set. The energy never wanes, in fact only gets more intense as they continue to play. There are moments when the members are so invested in their performance all you see is instruments raised and their bodies in the air, in one way or another. Roy gets ballsy enough to just stand on his bass, arms outstretched as if he’s truly soaring. It’s only my second show of the festival. But if the Street Guns’s performance is anything to go by, I’m bound to be exhausted before the end of the second day! 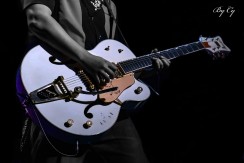 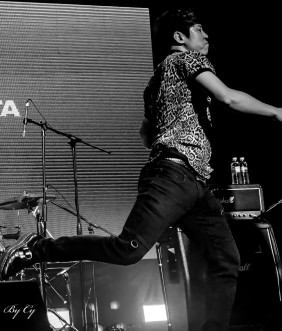