There have been very few defining moments in my life, moments that take what I knew about the world, about music, sound, energy, and irrevocably shift their meaning. My entire worldview is morphed and I’m given a new outlook on how things are meant to be.

That seems like a lot of lofty purple-hued language, but even the excessive prettiness in my speech isn’t enough to fully capture just what happened to me on November 12. Many of you may not know that I’m fairly new to the indie music scene. It’s something I’m not exactly proud of, but everyone’s got to start somewhere, right? Well, this was my introduction to the true meaning of punk in Korea. Gotta say, my perpetual tardiness to a collective music scene continues to frustrate me; however, the Dallas Korean Festival wasn’t a terrible first time.

I’m always humbled by the friends I have around me. Without the guidance and companionship of our very own Rebecca Cronan, there’s no way I would’ve known what I was getting myself into—and still that didn’t prepare me for the magnitude of what was about to happen to me. We spent the day until the main performance stage walking around Dallas’s Carrollton Asian Plaza—checked out H Mart (of course) and stopped for lunch at Omi Korean Grill & Bar and tea at Café Brown Sugar, where I experienced another first: butter toast.

After a bit we meandered to the front of the stage where they were just setting up the barricades. All the younger crowd were already getting excited, mostly to see G2. The organizers had the brilliant idea to play nonstop K-pop (most of it from BTS’s award-winning WINGS), so the crowd was already suffused with an electric energy that was actually quite contagious.

The concert began with the traditional Korean drum ensemble Jiae Park, who were followed by K-pop Dance team Nana Split. G2 opened as the first headlining act (more on his performance later), and then everything went crazy! 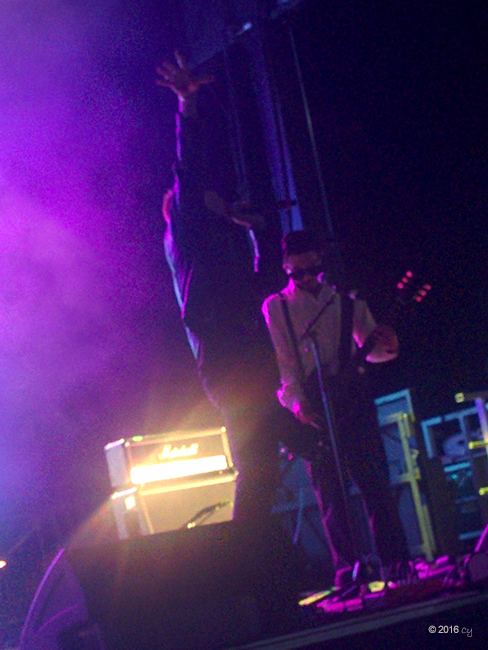 I know my fair share of punk artists, mostly hailing from the States or England, and mostly from the ’70s and ’80s. I’d just begun to get into the indie punk scene in Korea with some of the newer bands, so it was probably a matter of time before I got to dig into Korea’s punk past and discover the elegant chaos that is No Brain. And chaos is exactly what these guys represent: a freedom and fearlessness that speaks to years of probably being on the outside of what most would consider “respectable” Korean society.

What struck me about the band more than anything is how much they live for the stage, live for the audience. They give so much of themselves, all of it raw and honest and uncompromising. The music they’ve created over their twenty-year career comes from the ground. It’s grit under the nails, music that’s pure piss and vinegar, guts and shit all wrapped into something so glorious it borders on godlike.

Again with the purple prose. Forgive me. Let’s try to bring No Brain back down to the earth that birthed them.

I can honestly say I’ve never been more swept up in music than I was when the band started to play.

Lead singer Bulldaegal (Lee Sung-woo) has a voice that freaked me out when I heard it from the tiny speakers of a Samsung Galaxy 7. Hearing it up close absolutely took my breath away. It was like listening to someone who’s had to fight with teeth and nails, kicking and screaming, and finally running out of f*cks to give and just going from the gut.

Bassist Bbogle (Jeong Woo-yung) was directly in front of me, and he had an understated power that really blew me away. His skill on that damn instrument got into my chest and left the rhythm there long after we made our way back to Austin.

VOVO (Jeong Min-jun), the guitarist… good lord, that man has a stage presence that knocked me on my ass. But his wildness onstage didn’t at all diminish the actual skill he has on the axe. There was a moment when I leaned my head back, closed my eyes, and simply absorbed the majesty in the way he executed the music.

And Dolly (Hwang Hyun-seong)… oh, Dolly. This man is everything good and right in the world. The way he attacks the drums is nearly obscene, but he’s so incredibly powerful you hold his impression in your mind for days… weeks after seeing him.

One thing that will forever be imprinted in my mind was the love this band has for what it does. Their stage presence is effervescent, you honestly feel their souls ripple through each note. Even though a lot of us didn’t know the actual lyrics, Sung-woo was generous with his energy, including everyone, smiling with pure joy at even the crudest attempts to follow his lead. He took a moment to even express his awe in the diversity of the audience, embracing us by saying, “It doesn’t matter what color or nationality.”

Each song was exceptional, a nonstop party, a riot. I don’t think I’ve ever screamed so loud or so hard for anything in my life. It got to the point I didn’t know if I was screaming or if that was just the incessant ringing in my ears from the borderline dangerous decibel level. But the most pervasive feeling was absolute fun! Seeing No Brain live was much like going to a theme park, riding the fastest, tallest roller coaster, puking from the untamed ups and downs, then riding it about twelve more times. If you’re fortunate enough to grab Dolly’s bottle of soju as he sings crowd favorite “One Shot of Soju,” the ride, incredibly, becomes even crazier!

Seeing No Brain live was more than an experience. It was… a revelation. This band is a tempest, a hot and heavy rain that pelts everyone in its maelstrom until they’re sopping wet and disoriented yet left pleading for more of the chaos. I’ve been in my share of tornadoes, being brought up in the Midwest. This was the first time I’ve ever been caught in an EF-5. No Brain blew open my doors, wrenched me off the ground, and left me completely and utterly obliterated.

I can’t wait to see them again!