Thankfully, on day 2 of Zandari Festa, I managed to shake off my illness and exhaustion of the previous day and was able to jump straight into the first show of the night with a fresh mind.

First act of the night was Dead Buttons over at Yes24 MUV Hall again. Love this venue, by the way – it’s a great mix of a relaxed atmosphere above, and underground club below. It’s also not super smoke filled like some of the others. I guess I noticed venues a lot because I was over there for the first time, and didn’t know what to expect. But most of them were delightfully clean and all of them felt safe to me.

Dead Buttons is a loud-ass duo that slams into you with all the power of a freight train and doesn’t let you go until the last chord is played. You better hope you’ve found a seat on the train before they start – or you’re going to be in for one hell of a ride. This gritty rock band tosses bits of the dirty South at you and you’re left with nothing better to do than groove along or be left behind. They certainly have a loyal fanbase because I saw a lot of screaming folks who knew all the words to the songs cheering them on. I’d be willing to be we’ll be seeing them at SXSW soon.

I stuck around for two songs of Natural Killers from Japan. These guys were a really funky jazz fusion band that was a surprise. I sort of felt like I was listening to a live version of the Cowboy Bebop soundtrack. Which, I’ll admit – that’s where I learned to really love jazz music. I wish I’d had more time to devote to these guys, but soundcheck ran long, and I had to book it across Hongdae to see the next band. (You’ll be hearing this a lot for the next two days.) 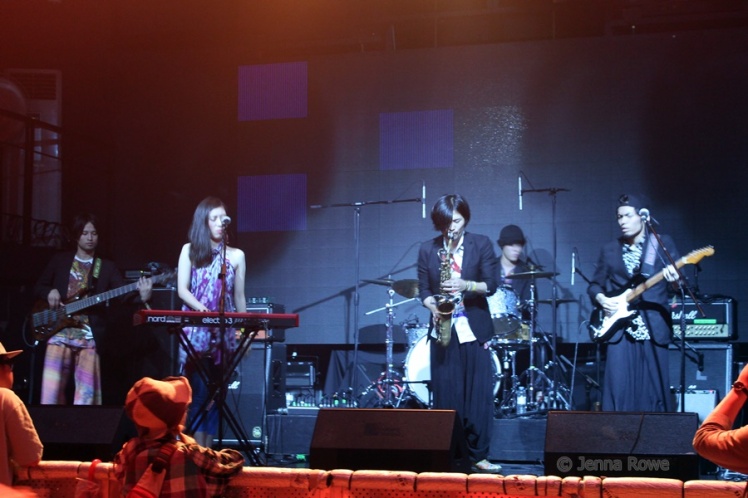 I jogged down a couple of blocks to make it the the last half of Wings of the ISANG‘s set. Glad I made it because this post-hardcore shoegaze music has really become one of my favorite genres, and this band was a surprise for me. I hadn’t had a lot of information about them honestly, until reading IndiefulROK‘s lavish review of their latest album. (You should also head over there for an interview with the band she just posted!) But if you read our site, you know about my love of Apollo 18, you know that melodic hypnotic sound really pulls me in, and seeing Wings of the ISANG play live brought the stories on their album to life. Their songs are all like chapters in a book, being craftily manipulated into a complete cohesive story. If you haven’t checked them out, you really ought to.

I was superbly excited to see Ludistelo next. This is one of the bands that stays on constant rotation on my iPod. I love their excellent blend of genres, as if they’ve audibly painted together shoegaze, electro and a touch of ..well Star Trek. It’s definitely music you can see yourself listening to if you were floating miles above the earth. And the crowds definitely agree – because the house absolutely filled up when they took the stage at Rolling Hall. Vocalist / synthesizer Sangjin commands the stage, even while trapped behind his instruments. Something that’s a rare feat. The charisma of the entire band had everyone dancing on their feet and cheering wildly. I know I really started to notice the crowds during this performance, it was such a great experience to get to see the Korean bands in their native clubs with their normal fans, because it’s just a completely different experience to see them out of their elements when they come abroad. The fans in Korea may sometimes be a bit more reserved when bands are playing, but they definitely have a way of making their presence known.

It was time to move again after this, and I ran back to MUV Hall for half of StreetGuns‘ set. Two words for you: Upright Bass.

Yep. These guys are one of the most unique bands in Korea, bringing you straight-up Rockabilly – with a Korean flair. The entire band is full of smiles and energy, so you’ve got little chance to withstand their cloud of charisma. Come to StreetGuns performances prepared to dance and sweat – it’s a must.

And for the last artist of the night….check out the next article – they needed their own post.

One thought on “Zandari Festa: Day 2”