Day 2 of Zandari Festa wrapped up with a band I’d been eager to see since we’d spoken to each other earlier in the day. Ego Function Error is one of those bands you must see to believe. With their message of gender nonconformity and redefining society’s characterization of femininity, seeing how they work live is a marvel and a blessing. 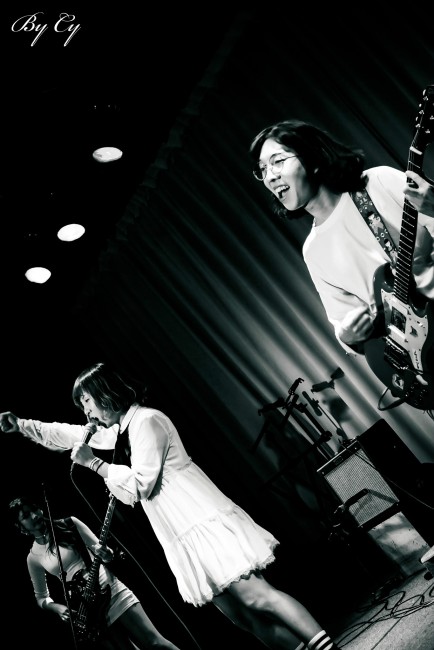 Unlike most of the bands I’d seen thus far, EFE’s soundcheck is… Well, it’s breathtaking to say the least. Not because they did anything different. The same sort of checking for levels, seeing how their sound fills the room. But from my vantage point — having managed to make my way to the front right side of the stage after DTSQ’s showcase — I was directly in front of Kook-kook, the enthusiastic gentleman pixie who grabbed my attention from the moment I sat down at the table for my chat with the band. Listen… when I tell you this young man and the way he plays guitar…

The absolute disrespect! If you’re keeping tabs, I’d started to accumulate a list of what I call the “Shit Talkers,” those guitarists who have so damn much to say. Well, at this point, Kook-kook was the shit-talkingest of them all. This boy knows his blues, and let me tell you, even without being in performance mode he knows how to rip it out of his instrument. I’m so utterly flabbergasted with his ability to bring the guitar to its knees I think I stop breathing for a second.

At that point I think, “If the soundcheck is this good, how am I going to survive the actual show?”

Still not sure how I managed it, folks.

The first thing you must know about Ego Function Error is they know how to make a lot of noise. Especially their impish leader, Min-jung. Though she’d already showed herself for the faerie queen she is during our conversation, something explodes out of her when she’s on stage. No one would ever accuse her of being shy or reserved, even when she’s all business during an interview. However, when she hits a stage, beware.

She absolutely holds no prisoners. She flings herself around, jumps up and down, stomping on that stage like she’s trying to break the damn thing so no one will even think about performing on it after her. The frills of her dress crunch and hike up, her hair whips, dancing around as she does. And. That. Voice! Though she did say, and reiterate, that Cyndi Lauper is her biggest musical inspiration, it’s easy to miss if you only listen to Ego Function Error’s studio albums. Same as with Lauper herself, MJ’s impish tone is misleading. Let her get behind a mic, I  dare you. You’re going to feel the force of all that soul and power, best believe.

MJ is a hurricane, a gale force unlike anything I’d experienced thus far (save for Snow on her drum set the previous day, and even then there wasn’t any singing coming from that woman).

Won-ji behind her own drum set is just as forceful. Her personality doesn’t change from offstage to when she finally alights it. She’s still all positive energy and enthusiasm. She attacks her drums with the same temperament, a barely contained wildness tempered by an inviting smile. But don’t let her coquettish nature fool you. Woman is a brilliant musician and provides the pulse of the music, giving MJ a kick that propels her into action.

Seung-hyun is still the same picture of elegant stoicism she portrayed earlier. However, while the company of the conversation cracked a little of that shell, when she’s onstage she is absolutely no-nonsense. She plays steadily, giving each song its powerful heartbeat as only a bassist can. There are moments when she breaks away from that deceptively cold facade to let loose a small but genuine smile. Most notably it’s when MJ is really going for it, especially when her antics include a quick glance in Seung-hyun’s direction.

Then, of course, the young man who absolutely stole my heart. Kook-kook is the band’s composer, the music pouring out of him as if he’s actually giving birth and life to everything that he creates. It’s not a stretch to say that he’s the band’s foundation. He plays the music as if it’s a part of him. When the showcase begins, he plays the music with very little fanfare. But maybe a song or two in, all hell breaks loose.

Initially he matches pace with MJ. Then something happens, perhaps the moment the two meet in the center of the stage and trade a bit of playfulness. But at some point the music gets real good to him. It becomes a part of him, and when that happens, it’s as if he’s possessed. He jumps and dances, lifts his face up to the lights. At one point he ends up on his back, playing with all the passion of the universe. It’s enough to utterly wipe you out.

Both he and MJ make trips to the front of the stage and even venture out into the audience at one point. The show is at pitch from note one, so when their set ends, it’s no surprise the crowd isn’t done with them. A chorus of “Encore! Encore!” resonates through Veloso hall. Of course, the band isn’t quite done either, no matter the show made of unplugging and walking off stage. Though, it’s obvious to anyone paying attention that Won-ji is egging us on, imploring us to try to get everyone else back onstage with her. It works, obviously. Her band mates return and launch into a couple of songs they no doubt reserve for such an occasion.

Then… oh, then. MJ says they’re going to perform their version of Beatles classic “Helter Skelter.” My first thought? “No this female did not just say ‘Helter Skelter’!” Yes she did, and yes hell she did mean it. Though she did end up performing the supposed “death metal” piece that allowed her to actually scream on a track, when she starts laying into the hard-rocking blues of this tune… I’m lost forever.

This is what I’m talking about when I say that impish voice you hear on the record is all a matter of narrow perspective. Cyndi Lauper indeed. MJ is a power vocalist. Make no mistake about it. When she reaches the highest heights of her voice’s abilities it’s like the high priestess of rock ‘n’ roll graces us with her presence, then slaps us in the face for good measure.

The rest of the band? They’re all in! Won-ji is just wild on the drums, Seung-hyun blesses us with another small smile. Kook-kook is stark-raving mad, thrashing about, whipping his ax around, even doing his best impression of Jimi Hendrix and playing a few chords with his tongue (a skill quite a few of the heaviest shit talkers I’ve seen are wont to show off).

By the end of Ego Function Error’s set, the audience is completely wiped out. The band is just that outrageous, hell-bent on driving us crazy. In no uncertain terms, they most definitely succeeded.

Day 2 of Zandari Festa in the books. My wig is completely pulled back. 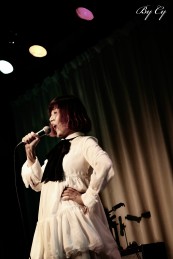