Right on the heels of watching perhaps the loudest rockers to hit Zandari Festa, I was blessed the with opportunity to see another band I’d never actually heard of. However, upon arriving in South Korea, their reputation preceded them. There was a big fervor about them as they got ready to perform. the fact they were doing their soundcheck behind a screen probably played a big part in amplifying the legend surrounding their name. It’s a legendary status that’s certainly well earned.

Today would be the start of my chronicling  what I dubbed the “shit-talkers” — guitarists who just seem to have so much to say on that damn ax. Let me tell you, the two young sirs playing guitar on that stage talked so much mess I was overcome with this uncanny feeling that I was back home listening to blues records. Yeah… just absolute rude skill.

But all that would come much later. The show opened up with lead singer Geun-hong laying down vocals like the universe decided to redesign the cosmos and his voice was going to be the catalyst. Seriously, he just opened his mouth and it was as if the entire audience was instantly reborn (after 57 obliterated them just ten minutes before). From the first note, the band was ready. And when I say ready, I mean they came prepared to utterly turn the crowd out. Geun-hong is a natural performer. He points his finger at you, and at that moment you know you’re his next victim. He presides over the audience like a revival preacher — his voice mighty, his presence suffocating, and his performance so charismatic you can’t help but fall in love.

This, of course, leads us to the two guitarists in the band. It’s unavoidable. The eyes are instantly drawn to the guitarist on the right of the stage with a mane of hair that seems to flow right down to his ankles. But don’t let his pretty face fool you. Let me tell you something: that kid can throw the hell down! Lyn, the youngest member of the band, is obviously no novice when it comes to his weapon of choice. Not only does he thrash around with the enthusiasm of a young’in, he actually has the technique and the old-school soul of someone who’s lived through some things.

It’s shocking, really, to see just how wicked he can get when he’s really in the moment and lets the music absolutely possess him. Someone that pretty ought not be able to handle the guitar like someone who’s lived a hard life of the blues.

Pair that with the calm, unassuming demeanor of their blond-haired guitarist, Min-hyuk. Upon seeing him, I know there’s something familiar about him. In the moment — that moment being when he started to lay in some heavy shit-talking with his own solo — I can’t quite figure out why. To later find out he’s a member of another band that I’m fond off, Bye Bye Badman, doesn’t surprise me. I’m drawn to guitarists like the proverbial moth to a flame. But when they can just lay a whole lot of preaching on the instrument, I can’t help but feel myself overwhelmed.

He’s a stoic gentleman, doesn’t insist upon his presence. In fact, if it weren’t for the brightness of his hair, you may miss him among all the rip-roaring going on on-stage. But when he’s given space to just play… oh, nobody’s touching him. It’s enough to make you cry just how heavily he can make that guitar moan. He’s like an experienced lover. He doesn’t have to do much to make sounds like sin melt out of whatever he’s playing.

Then we get to the swag and smoothness of bassist Hyuk-jo. Honestly, he was really the coolest brotha on stage. While he did take time to interact with the other members, playing off them and trying to amp them to their highest heights, he really just sat on his side of the stage, putting some heavy bottom on an almost unwieldy sound. The way he handled that bass was like someone grabbing control over something hell-bent on being nothing but chaos. Lovely chaos, but chaos nonetheless.

That’s when you notice that your heart’s beating in time with even the wildest riffs. Drummer Dae-hee. This man right here…! There’s just something about the way he guides the band. Another man who isn’t necessarily insistent, but you know without a doubt that he’s there. He’ s steady yet has an untamed wildness about him. He knows exactly where the band’s going even if in the moment all the audience can do is rage along with them as they let everything go.

ABTB has allegedly been around for only four years. But there’s so much experience in the way they unfold into each song. Emotion, raw and heavy and thick, simply drenches the audience. If we weren’t already sweating in a fervor before, ABTB came on stage to shred the last bits of what control was left of us.

Club FF was truly blessed on this first night of Zandari. If 57 was the sermon, ABTB was the prayer. Each and every one of our souls was truly elevated to something holy that night. 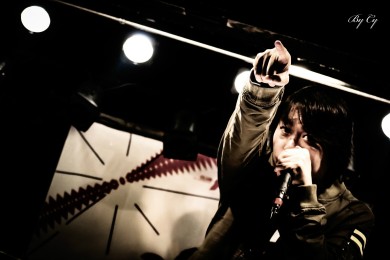 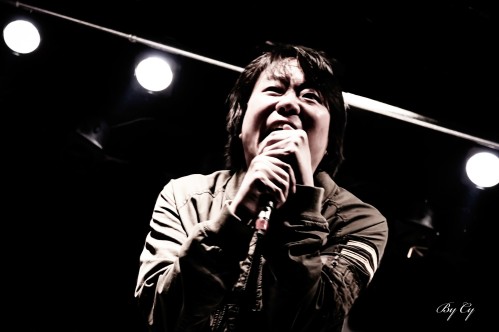