A few weeks ago I came across folk pop rock singer-songwriter Soundhills (사운드힐즈) through a friend who lives in South Korea. I had the opportunity to hear his DIY CD through her and I was so immediately drawn to his beautiful voice and soulful touching melodies that I went on the search for more material. Apart from his original work, Lee Hyun has an array of cover songs in English and Korean on his Soundcloud/Youtube. The moment I shared one of his MV’s with a few friends they were blown away and wanted to know more about him like I did. With an earnest heart to get to know the man behind Soundhills, I emailed him for a possible email interview and he graciously responded and we talked about his life, music and inspirations among other things.

We started off by talking about his early life and what propelled him to become a musician, he says, “I think my father influenced me the most. He is a keyboardist for the band, that marked the history of South Korean rock music, Cho Yong-pil and Great Birth (위대한 탄생). I seem to have spent my childhood with vague conviction that I will eventually become a musician in such an environment. However, during Cho Yong-Pil’s 40th anniversary concert is what ignited my curiosity into the world of music. During that concert Cho Yong-Pil said ‘I’ve tried to sing songs that convey the feeling that life goes on,’ his words impacted me very much.”

“When I was 13 years old, my father, bought me an acoustic guitar for $60, and the first song I learned was “Dust In The Wind” by Kansas. Then, naturally, I moved on to electric guitar and formed a band with my friends in school. Back then I was quite crazy about hard rock and metal. I am a huge fan of Metallica and I love the life of James Hetfield, he is my hero.”

“The area where I spent my school days was quite small, but the bonds between each band member were strong. We polished our skills on our own by holding regular performances and sharing many things with each other. I performed hardcore music for a while under the name of Hysteric Banana. Besides the band work I also played trombone in the school’s orchestra for three years,” he continues.

Furthermore, “My father wanted me to go the South Korean Ivy League and do music in earnest. I studied hard because I was so obedient at the time, but at the age of 20 I started to teach students math as a side job and bought necessary instruments.”

Around the same time Lee Hyun went through a significant change in his music career. He recalls,  “During that time, I felt a change in me when I listened to Maroon 5, John Mayer, and Jason Mraz. Their music shook my heart. At that time I was playing guitar in an emocore band, but I realized that perhaps I was more suited to sing pop based acoustic songs because the people around me always responded very positively to that style. Looking back at those early years, my 20’s was a time of discovery. After forming the band Soundhills in 2010, the band went through many changes and as of now I’m working as a one-man band. Although I don’t play hard rock and metal anymore I still have that feeling in my heart.”

Although he’s deeply influenced by Cho Yong-pil and his father he also recalls other inspirations. Lee says, “What also inspires me is the author Paulo Coelho books because there is always an intensity or pursuit to life in his work. In addition, recently I listened to an album of the Australian musician Touch Sensitive. The tracks based on retro sounds were fresh and I wanted to apply it to my music.”

However, “These days, I listen to the music of Shawn Mendes or Ella Mai. And the single “Mr.Unicorn” from Norwegian band D’Sound is soooooooo amazing,” he adds. 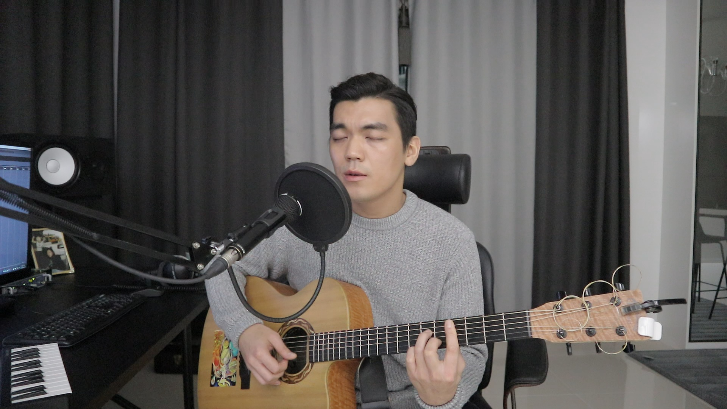 When the creative juices are low, “I’m one of those people who likes to go on a trip although it incurs debts. My mother and I travel a lot, which gives me a long-term boost. When I’m not traveling and I’m stressed or unmotivated I like to rejuvenate creativity by going to a sauna or taking a hot shower. I usually take hot showers when something isn’t working out,” Lee Hyun responds.

As for his process for composing he says, “I think the process of making a frame for playing and singing takes about 3 to 4 days. However, it usually takes about three months to invest much more time in the arrangement. As for lyrics, I usually write down good phrases from time to time, and if I have a certain amount of melody, I read the notes again, find a suitable phrase, and then develop the story further.”

For many of us that are fans of indie music (South Korean or otherwise) we know that it can be challenging. So I wondered how Lee Hyun perceived the challenges of the South Korean music scene. “Being a musician is a matter of perceived identity, so I don’t think it’s difficult because it’s South Korea. I think becoming a popular musician is a tough and difficult job in every place. To put it a little bit more strongly, I think people tend to overly connect the essence of musicians with monetary success because of the current popularity of auditions and media in South Korea. If you’re not obsessed with how you’re going to look to others, won’t you be able to balance them enough? Sacrifice is necessary to live with what I want to say.

I don’t teach anymore. My main income is arrangement and mixing from other production teams. The amount is small, like the minimum amount I can live on in this country. Of course, if I want to go to the club and have more drinks with my friends, I can do extracurricular work or something else, but that’s not the way I want to live my life as a ‘musician’.”

It’s hard to picture Lee Hyun performing hardcore music after listening to his Soundhills tracks because his voice is smooth like silk and rich with emotions that emit a sense of calmness and warmth through every verse. To my comments Lee Hyun responds, “Thank you very much. You have no idea how much it motivates me. I have never taken vocal lessons or have been corrected for pronunciation. I always feel sorry for my voice after the recording, but I keep trying.”

In Soundcloud, you can find most of Soundhills’ releases, among his tracks there were two songs that stood out the most for me, 기다려 and 나이. 기다려 and 나이  remind me of a warm spring day by the sea, and because I’m not fluent in Korean I can imagine my own storyline to these songs, so that’s why I asked Lee Hyun what inspired these songs. He reveals, “I was close to 30 when I released my first single. People around me would always tell me about my potential, but I didn’t have any output to live up to. It was also the reason why I thought I’d do the band alone, and the lyrics of “기다려, 나이” were written with a will to overcome my regret and burden. They were written for the version of  me who didn’t live up to the expectations of those around me.”

In late february he posted a cover of “Missin’ You Like Crazy” by Us The Duo, a Southern California folk pop duo. I was curious to know who his partner in the cover was he says, “Her nickname is e-roda (이로다), a singer-songwriter that my friend introduced me to. I had a chance to have dinner with her, and when I told her I was practicing to cover a really good song, she took a moment to listen to the song and asked me to do it with her, which in fact happened in a flash. She is also preparing for a single.”

For his current projects Lee says, “My new single is the one that I’m focused on the most. The guitar and vocal recording will be finished soon, and I hope the work will be completed within March. Also, not long ago, I participated in a new single by a production team called Yellow Lights as a featuring vocalist. It will also be released around the end of March, and a collaboration single with DJ Plomo is underway. Other than that, I’m preparing for a YouTube video and performances at clubs.”

As for the rest of the year he hopes to post at least one YouTube clip a month and start a club performance in April. “I’m not so strong at multitasking and I think that’s my limit. Oh, one more thing though, I want to work out and make a hot body within this year…,” he says.

As some of you may know already I always like to ask three questions before I end our interviews. First, since this article will also be published in Spanish for our Spanish speaking readers in Latin America, I like to ask what countries they’d like play in if they ever tour in Latin America. Lee responds “To me, South America feels like the last place to travel to. For now, there is no direct flight to a country of Latin America from South Korea and maybe that’s why it feels more mysterious than anywhere else to me. It seems that all my acquaintances who have been to some countries there have come back with great happiness. I have been to many countries in Asia. Going to Japan, to exaggerate a little bit, feels like a little special weekend in a sense, but I want to travel to Latin America when I’m mentally ready, I want to stay for a few months or a year. I want to go to as many countries as I can, but if I have to choose, I want to go to Chile. I really want to see the night sky in the Atacama Desert.”

Second, we are always looking for new music to listen to. So we asked if there are any other  South Korean band/s he suggest we listen to.
He says, “I love Lee Han-Chul and I was greatly influenced by him, but it’s sad that a treasure like him doesn’t get much attention. All of his solo songs are good, but you can also check him out in the band Bulldog Mansion.”

To close the interview, we wanted to know, if someone is brand new to Soundhills and they want to check out his music, which song would he recommend. “I would recommend you play “나이” first because the melody is simple and it’s easy for anyone to listen to. If you can read Korean lyrics, I hope you listen to “뒤돌아보면.”